Many years ago I was looking to adopt a dog. A friend told me about Virginia German Shepherd Rescue. I was not looking for a specific breed but liked that VGSR's dogs are in-home fostered and that they took in seniors and special needs dogs, too. I applied and as I waited to hear if I was approved, thought if it at all possible I would like to adopt two brothers and a dog named Mickie-D. The brothers had been fostered separately and were doing very well, so I adopted one of the brothers named Tigger. As Mickie-D was a special needs dog I had several conversations with his foster to ensure we were a fit and I could give him what he needed. The day Mickie-D came to visit and happily joined the pack was a thrill.

Shortly after, I became a volunteer wanting to give thanks by supporting VGSR's work. Tigger preferred being a home-body, running around the yard, doing basic agility and snoozing with his new feline pals. Mickie-D enjoyed naps with the felines, too, but also liked going on home visits and meeting potential adopters. We talked about the rescue and Mickie-D's medical condition and he showed everyone that he could do nearly anything. You see Mickie-D was born with funny feet – all four looked like a rabbit's back feet! Mickie-D was not fazed by his funny feet and ran, jumped, climbed stairs, romped and played. Watching Tigger and Mickie-D's personalities emerge as we learned from one another and grew together, I was inspired to become a foster. For the last several years I have been fostering senior dogs and dogs who need medical and hospice care which has been a very rewarding experience.

I write for myself and began writing a short story about Mickie-D and realized his story might resonate with children. There were times as I wrote and re-wrote the story that I had doubts about publishing it but I would remember the times I had with Mickie and how he made me and others smile and laugh. And how people who met him realized his condition did not limit him. He is the inspiration for following my dream of writing a children's book that I hope children will enjoy and lead them to embrace what makes them different and positively rock it! Mickie-D really liked kids and I'm hoping they like his story and will want to read more about Mickie-D's adventures as a rescue alum and ambassador. Stay tuned for a new series, featuring Milo, a VGSR rescue German Shepherd/Beagle/Basset mix who shares his tales of being a foster brother! 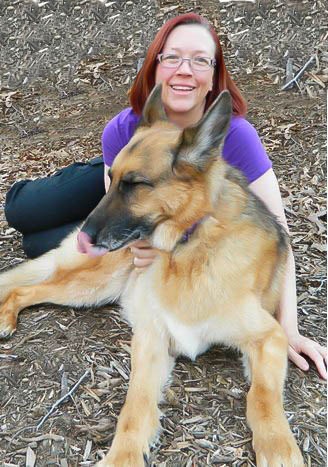 Dawn Michele McCarty is an author of children’s picture books featuring her adopted rescue dogs. Born in Maryland, she has lived in Texas and Virginia and recently moved to Florida. She graduated from Texas A&M with Bachelor’s Degrees in Russian Language and Psychology and lived in Russia for 8 years. Virginia has been her home since 2000. After adopting from the Virginia German Shepherd Rescue, she became a volunteer for the organization. Dawn enjoys fostering senior dogs and is an advocate for older dogs, who are often overlooked by people looking to adopt. She spends her free time with her personal and foster dogs, participating in adventures and finding inspiration for her next book.

Contact Dawn today with any questions or comments that you may have!